A wide shot, a horizontal image. A classic interpretation of a contemporary genre scene – the night – though we don’t know where. It is a summer evening, the weather is mild. On the side of the road, sitting on a simple canvas chair, a barechested man is waiting. In front of him are melons and watermelons, yellow, green with white stripes. Some are cut open, tempting you with the rosy tint of their fresh and juicy flesh. The scene is lit by a single bulb that diffuses a yellow light sculpting the night into an almost romantic landscape, one you might place as being in Germany or Central Europe.

A summer scene you could find elsewhere, in other latitudes, along with the same fruit, and other things – vegetables, provisions, snacks for that break when the road becomes too long or when the invitation to stop for a wander seduces you. Here, we are in Ukraine. The traders come from Azerbaijan, from Georgia, from Armenia. But that hardly matters, as far as the meaning of the images is concerned. The essence, perfectly pictorial, remains this soothing perception of a world abundant with sweetness, of a promise of pleasure.

It is rare, when we buy these fruit, for us to think about those who sell them, about what is behind this ephemeral, travelling, roadside theatre. Kirill Golovchenko has done just that. He has gone to see what is behind the scenes. He became attached to these men and children who live there, temporary migrants, seasonal workers searching for economic survival. And to protect themselves, for somewhere to live, they build these fragile huts with their harsh blue plastic which structures the composition of the wide shot.

He then changed his perspective, opting for vertical images, hard and implacable, descriptive to excess one could say. He captured them with a violent flash – almost surgically as if with a scalpel – cutting the individuals, the details, the objects, the materials, the shapes, the structures and the organisation of shapes from a black, uniformly black background. They become bodies in tension, sculptures almost, strained, in perpetual effort or in abandonment. Like Sisyphus, they are inseparable from their burden of watermelons. As they transport the piled up fruit they struggle to stay human. The fruit becomes a part of them or, more violent still, a watermelon replaces their head. Harvested in the same way, through the violence of the light, there are scraps of information – an electric wire, stained tickets in a drawer, remnants of soup, a dog arching his back – all revealed without ever trying to describe or explain their context.

The viewer – led by Kirill Golovchenko – discovers in this world countless ‘ready mades’ – unintended installations of contemporary art which are formed through the way images are framed. With a rare sense of composition, and by selecting distances which are as flexible as they are appropriate, he deconstructs a universe for us, delivering formally impeccable fragments that remain to be deciphered, to feed the direction of our response. It is up to the viewer to make the connections – to respond to these elements, framed coldly, unadorned, and without sentimentality – contrary to all those wellmeaning sentiments, the bland tears, that work with a social purpose has, for so long, been so full of.

Equally, it is up to the viewer to put into perspective the relationship between photography and sculpture, up to him or her to question notions of background (if there is a black background in which there is nothing ‘neutral’, then it is here), and of volume. And the proof that, in sculpture as in photography – even more than in painting – light and matter are the basic elements, a grammar. Like any sculptor, or viewer of sculpture, Kirill Golovchenko makes it clear that one must be able to look from all sides at whatever it is we want to understand. This is what he has done, and it shows. He conceals nothing. He doesn’t hide behind ellipses or metaphors, he faces the world directly, without cheating, opening our eyes as fully as his, including – and perhaps especially – to areas which are disturbing.

In his radicalism as a contemporary documentary photographer, Kirill Golovchenko knows how to rid himself of pretence. He also knows how to avoid all the formal conventions in the construction of narrative and the ‘acceptable’ use of flash. Above all, he knows, in his practice, how to highlight the potential of photography today. In its dependence on tangible reality, without which it cannot represent, it can be used to go beyond this soft pictorial appearance that we sometimes come across by chance on a road on a summer evening. And so, whilst it may not be loquacious, it still knows how to reveal – better than other tools. It allows us to see the physical dimension, lives of pain, the flesh stripped back. 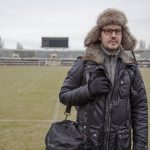